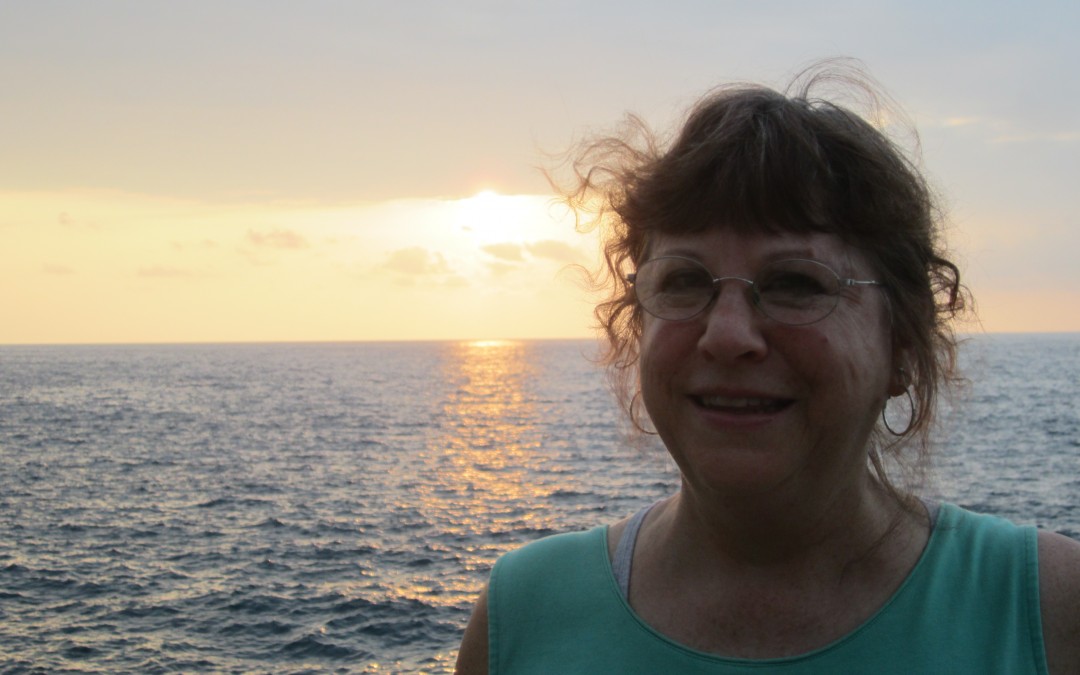 On Tuesday, February 24, I received a totally unexpected phone message – saying my younger sister, Chris, was having a heart attack and being transported by ambulance from Mt. Shasta (where she lives) to Redding, CA – to a bigger hospital. WHAT??? She just turned 63 a few days earlier!

I was busy with clients, and did not get a chance to phone my sister’s friend who left the message until afternoon. It was sounding serious, so I was guided to drive the 5 hours up to Redding after my last client.

I kept trying to “tune into” Chris – to feel her, to send her healing, but I couldn’t access her – so I could not sense what was happening. Before I left for the long drive, I was able to get ahold of a nurse in ICU where she was. They were talking 48 hours to determine if she would survive, and hoping for no brain damage. Apparently, she had needed to be resuscitated several times, had 3 stents put into the right side of her heart, and was just starting to wake up. No wonder I could not access Chris earlier!

During the drive up to Redding, I sent healing continuously – and called on all the “guides and angels and healers and helpers and Divine energy” – everyone to help her heal. I finally arrived at the hospital about 12:30am (yup, it was a long day!). I went to the ICU, heard the basics from the nurse, and spent some time with Chris, running energy into her heart. She was squeezing my hand, and was clearly knowing what was said (no brain damage – whew!).

One of the things I love about healing, and especially about working with my sister, is that her cells do their absolute best to do what is asked of them. The urgent issue the first night was to get her blood pressure stabilized. She was on many medications and a ventilator that was breathing for her (very uncomfortable!). The nurses were talking about a possible very invasive procedure, if they could not get her blood pressure stable by the next day.

I let her know that she needed to get her blood pressure stable – that was the key to getting off the ventilator and getting better. I did alot of work on her heart area to soothe and calm it. Chris heard me about stabilizing the blood pressure, we said goodnight, and I went to a place offered by the hospital to try and sleep.

When I went to bed, I once again asked all healing and divine energies to work on helping Chris heal. Most of the night, I was feeling a huge flow of energy moving through me. I did not sleep much, but the energy was amazing, buzzing, powerful.

The next morning, when I went to see Chris in the ICU, her blood pressure had stabilized! So, I got to work doing lots and lots of healing. I was so impressed that the ICU staff was totally supportive of me being there doing energy healing. We talked and listened to Chris’s heart, and got some powerful insights about emotional and spiritual aspects of the heart attack. Much of what came through that first day was that Chris was given a second chance at life – that she chose to “come back” and that her life is a huge gift. 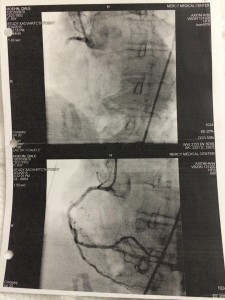 picture of Chris’s heart before and after stents.

Less than 24 hours after Chris arrived at the hospital, she had the ventilator tube removed from her throat! (Remember, the staff was saying it would be 48 hours before they knew if she would survive!). What a relief for her. She was starting to sip on liquids and feel better. By the end of the day, the doctor had reduced the blood pressure medications from three to one! She was on the way to recovery.

On Thursday, after two nights in the ICU, Chris was moved to a “telemetry” floor. She was off of most of the monitors and IVs! Her miraculous healing continued. I continued to do healing sessions on her every chance I could. I let my friends (FaceBook & students, etc.) know about Chris and asked for help. Healing came from everywhere! THANK YOU SO MUCH!

Friday, February 27, three days after Chris’s heart attack, a lovely respiratory therapist (Laurie) came into the room, gave Chris a strange look and asked Chris what her name is. Laurie explained that she had been to ICU and asked if Chris was there. She was shocked when she heard that Chris had “graduated” out of ICU the day before.

Laurie told us that she was in the ER when Chris arrived and was part of the team that kept resuscitating her after her heart stopped. She explained that there was an ER Tech riding on the cart doing CPR while they were transporting Chris to the Cath Lab. She explained that Chris’s heart would stop, they would get it started again, and then it would stop again. They had to use paddles at least 10 times. And, Laurie guessed it was about 20 minutes total that her heart was not working. Bless them for not giving up!

One of the lovely things about Laurie was she said she had a sense that Chris was going to make it – that it was definitely a miracle and that God and the Angels must have a plan for her. wow! She encouraged Chris to share her story because there are so many people who can use this kind of hope. What a gift on Chris’s last day at the hospital!

Before being discharged on Saturday, February 28, we had a lovely visit from the Cardiologist, who clearly stated that she believed Chris’s miraculous recovery was a miracle! She hugged us both, and said “I hope to never see you again”! Perfect.

The right side of Chris’s heart was totally blocked (you can see in the photo) – and thanks to a very determined ER team and 3 stents, it is now open and working well. Interesting (miraculous) that she did not “code” until she arrived at the ER – where there was a team to save her. Modern medicine saved her life – and the energy healing also helped her recovery to be miraculous, quick, and complete. She is still (March 15) recovering at home, but feeling good and so very grateful for life.

One funny thing I noticed after I got home was that my right knee (that had been bothering me for months – I had been scheduled for minor surgery) was no longer hurting. As I channeled healing energy through me, especially that first night, my body was healed also. As we heal others, we heal ourselves.